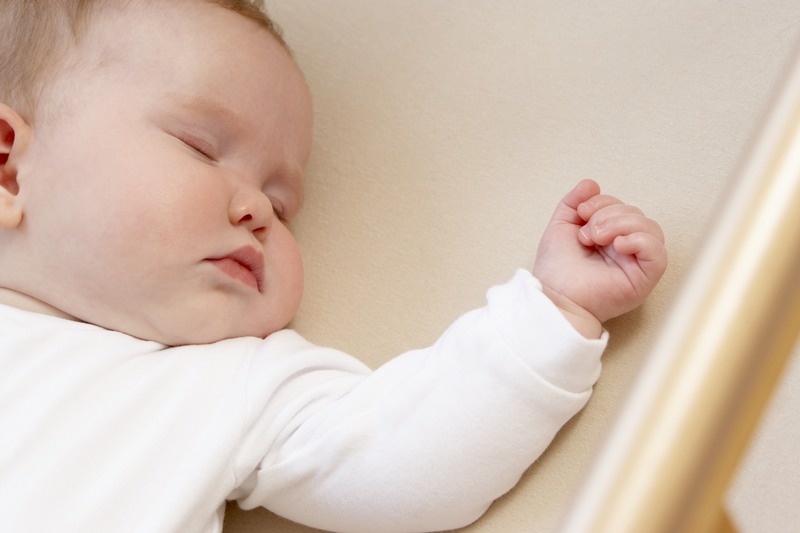 I really did think when I had my first baby, that he would just sleep when he was tired and eat when he was hungry, simple.  How wrong I was.  I had a very fractious, irritable baby who barely slept and feeding also become troublesome.  I had to learn how to get more sleep for my baby, and quickly!  I had a baby who was very symptomatic of not enough sleep for his needs. Where as others are blessed with happy and content babies in the day despite their minimal sleep, but notice the frequent nocturnal wakes are leading to more night feeds than possibly needed and parental exhaustion becoming a problem.

Let’s look at some reasons to help your baby to sleep well.

Human Growth Hormone ( hGH) is released from an area in the brain called the anterior pituitary.   While hGH can be released throughout the day and night, it is found to have greater levels released at night, notably more intensely secreted shortly after deep sleep and around 10pm at night. (www.medicnewstoday.com/articles.224093)  As it’s name indicates, it is related to the growth and development of your baby.  While growth is also influenced by genetic makeup, nutrition and state of wellness, the hGH plays a big part in this. Growth is not only muscular and skeletal, but mental and cognitive as well.  The more your baby sleeps, and in particular, deep sleep, you are helping them to grow to their optimal rate.  Babies spend much of their sleep in Rapid Eye Movement ( REM) phase of sleep. This is associated with dreaming and brain activity.  Deeper non-REM sleep develops more as your baby grows.  So it is important to capitalise on good lengths of sleep that will promote deep sleep and more hGH release.

When your baby is well rested, you will find that the awake periods between sleeps is much better.  Being rested, your baby will be able to tolerate more time learning about their surroundings.  For example, a rested baby is more likely to tolerate being down on the floor playing and examining things around them, noises, colours, smells, how things work, including their own bodies.  If they are physically developing, they will make more attempts to roll, crawl, cruise and walk.  However, if not well rested, they may demand to be carried, attended to and have you directing what they see, smell, hear and taste.  They do not have the tolerance to learn and develop as much as they would if they were rested.

After having a rest that is adequate for your baby, there is a boost of energy, to seek out new situations and practice these new skills that they are trying to master.

Babies require energy to feed properly.   Without obtaining optimal feed conditions and intake, babies do not sleep well.  Feed and sleep go hand in hand.  In order for babies to sleep well, they need to be well feed.  And in order for babies to feed well they need to be well rested.  I often see babies feeding ( breast or bottle) that start feeding well and very quickly they start to take smaller and less nutritive sucks.  They will either do these less intense sucks so it appears that they are feeding well, especially if breast feeding and quantity of milk intake is more difficult to ascertain.  Alternatively they may fall asleep while feeding or become fussy and refuse a feed or only feed under certain conditions, such as in a particular place, limited noise and light around them.

With frequent night wakes, some parents will mistake this waking for hunger and the baby will be offered and very likely take more feeds than it requires.  Other parents simply become exasperated at not being able to settle their baby back to sleep with anything but a feed and so succumb to offering a feed, only to find after a few sucks the baby promptly falls asleep after barely consuming any fluid.  They know their baby is unlikely to be hungry but are at a loss to mange the situation without a feed opportunity.  Either way, by feeding more nocturnally than possibly needed, babies then become fussy in the day with their feeds and some complete refusal, which then in turn does turn to hunger at night due to minimal intake during the day and so perpetuates this cycle.

By helping your baby to settle without associating sleep with a feed, you are helping them to better sleep and also helping them to feed as well as needed in daylight hours.

This might seem an obvious assessment.  Babies who are constantly over-tired or are going through a period of over-tiredness that may be caused by illness or travel may behave in a different manner.  They may become fussy with food, who they will be attended to by, have short attention spans and explore/learn less.  Night terrors in children can be linked to being overtired from the day.  Parents who struggle with their child’s sleep may come to the conclusion that if they keep their babies up with little or no day sleep, that they must want to sleep well at night, crashing with exhaustion.  While it can happen like this, it is not usually the case.  Babies that have minimal day sleep, as we have already seen, are irritable, don’t feed as well and can often fight sleep by the evening, so even getting them to sleep becomes an Olympic sport.  They eventually relent and fall asleep, but this may be hours later than when you felt they were ready to sleep.  They then needed a lot of help from you and now are wakeful at  night with night terrors, irritable sleep and constant reinforcement from you of feeling that they need to fall back to sleep, in order to get more rest out of them.  The lack of day sleep is contributing to the lack of night sleep.

When babies are tired, they behave in different ways.  For some, they don’t want to be held, becoming frustrated at being contained and nursed.  Many however, become clingy and inconsolable if left alone even for a minute. Early in my career as a Sleep Specialist, I was called to a beautiful baby, Isabella.  Her mother requesting help for her clingy daughter that in a large, extended Italian family was a problem as Isabella wouldn’t be held or cared for by anyone other than her mother.  Isabella’s mother was struggling at family events ( which were numerous) and not able to leave Isabella with her doting Grandmothers and Uncles, despite very much wanting to do this.  The crux of Isabella’s problem was, that she was overtired.  We concentrated on her sleep deficiency and soon had Isabella literally sleeping like a baby, day and night.  I will never forget the beautiful phone call I got from Isabella’s mother early on a Monday morning.  The family had attended a big  Christening the day before.  Isabella had many nights of now sleeping well and a good morning sleep and a feed before heading off to the Mass. Isabella arrived and put out her arms to be collected by her Uncles. All afternoon Isabella was passed around her relatives, being happy and interactive with everyone.  Her true personality had emerged and her family while delighted with this new change, albeit gobsmacked.  Isabella’s mother wept with emotional joy as she relayed this wonderful day to me.  With Isabella now sleeping well, she was eating well, and happy to have a little distance from her mother and enjoy being part of a large family.  Her relationships had changed, and so had her mother’s.  Isabella’s mother was now enjoying her daughter like never before, and looked forward to family celebrations and events rather than dread or avoid them. She felt much closer to her family and was praised as a wonderful mother.   The extra support that was being offered to her she could now accept as Isabella would be cared for by her relatives with her without her mother present.   Her relationship with her husband, Isabella’s father was also thriving.  They too were now well rested and able to cope with a growing child, work and their own relationship.  The bickering and arguing lessened and they looked forward to seeing each other when her husband returned from work each day and spending some quality time together in the evening before settling to a good night if restful sleep.  They were part of their community once more and very happy to be so. The ripple effect of good sleep was enormous.

We are all so much more pleasant to be around when are rested. We also then have the tolerance to manage situations that are stressful far better than when we are not.

If you need assistance to help improve your baby’s sleep, contact us at Carolines Angels